From AliExpress I ordered this nice PCB with a logaritmic power detector circuit onboard. The electronics is designed around an AD8307 integrated circuit. The detector should operate in the range 1 - 600 MHz. DC input anywhere between 6 .. 15 Volts.

All ingredients are there to realize a nice S-meter / RF Pwr-meter. 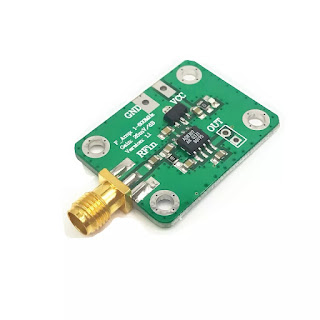 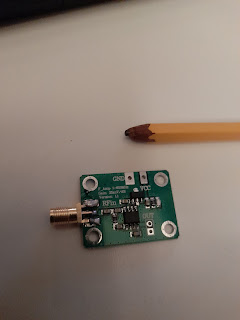 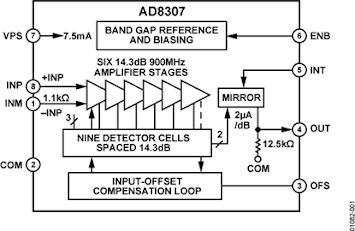 JostyKit was the name of a Danish manufacturer that sold nice Do-It-Yourself kits. One of them was the HF65. In fact a free running oscillator that operated in the FM broadcast band (and below and above J, according to the specification sheet somewhere between 60 -145 MHz). A 2N2219 transistor provided appr. 1 Watt HF. The modulation was a mix of FM and AM, but on a regular FM tuner one could easily hear the HF65 and the sound quality wasn’t even bad.

Anyway around 1977 I played with this nice device and was able to broadcast some music in the neighbourhood. 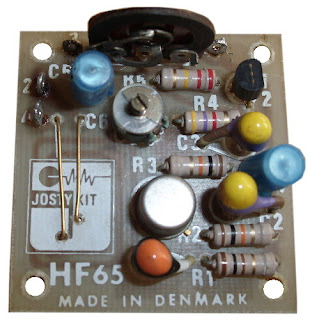 I think many liscenced HAM operators nowadays started their radio experience with transmitters similar to the HF65. 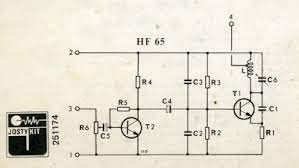 Lately there is quite a lot of attention for the 8 m band (40 MHz). Transmissions are done from Ireland, UK  and Denmark for example. 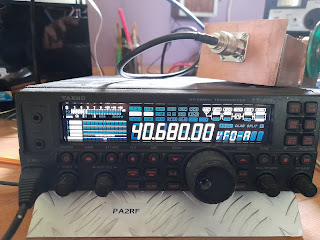 This band could be interesting to explore for various reasons:

The 8-meter band shares many characteristics with the neighboring 6-meter band. However, as it is somewhat lower in frequency it does display the better propagation mechanisms via the F2 layer normally seen at  HF. Also sporadic E-propagation is common on this band in summer.

After I performed the MARS modification, my FT-450 is able to receive 40 MHz signals. Of course the FT-450 input filters are not designed for this frequencies.

I am working on a 8 m bandpass filter / pre-amplifier for the FT-450 to increase the sensitivity for this band. 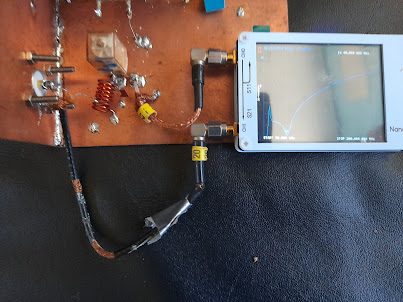 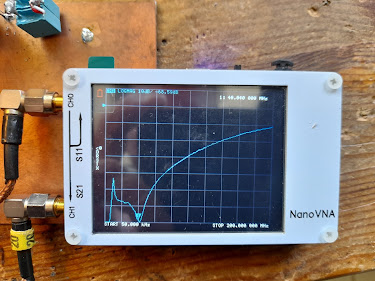 For more than 10 years I have a piece of hardware in my junkbox that waits for an application: 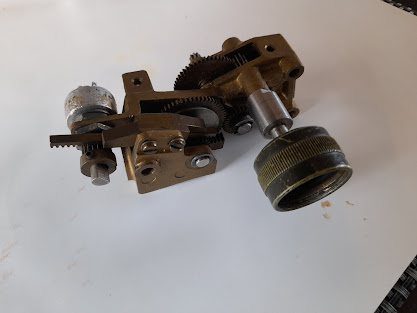 It is an old school mechanical tuning device, most likely obtained from 'green' radio equipment. The tuning knob drives, tru a variety of gear wheels, a 100 Kohm potentiometer. 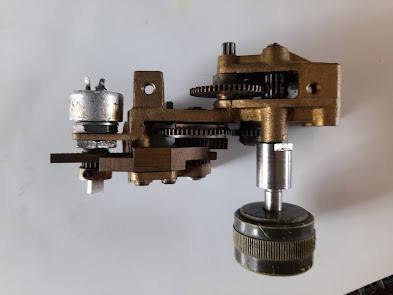 This beautiful piece of mechanical art waits to be incorporated into a homebrew VFO (for example). 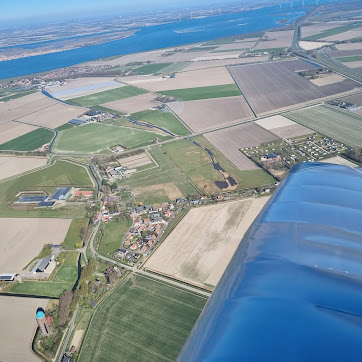 My QTH Zuidzijde, locator JO21dq from above. Photographed by a collegue in a Robin DR400, March 2022

As a radio amateur I am interested in all sorts of electromagnetic radiation. That includes thermal radiation in the infrared spectrum as well. Lately prof. William Harper visited The Netherlands with a remarkable presentation on climate. I was intrigued by one of his graphs:

The picture shows us the outgoing thermal flux spectrum from earth.
If there were no greenhouse gases, the (uv/visible/thermal) radiation going to space would be the area under the blue (Planck) curve.
The green curve is the computed spectrum with all the greenhouse gases present except for CO2.
The black and red lines are the energy fluxes for the CO2 concentrations for 400 ppm (part per million) and 800 ppm respectively.
When doubling the earth's CO2 concentration from 400 to 800 ppm, the outgoing flux will decrease from 277 W/m2 to 274 W/m2. A change of 3 W/m2
IPCC fully agrees with this model. However, the dispute is ongoing whether the 3 W/m2 change will raise earth's average temperature by 1.4 degrees C (Happer) or 4.7 degrees C or even more (IPCC).
It looks like the greenhouse effect of CO2 is already more or less saturated. Doubling CO2 concentration probably does not make much difference.
More on this subject:
https://www.scienceunderattack.com/blog/2021/4/5/how-near-saturation-of-co2-limits-future-global-warming-74 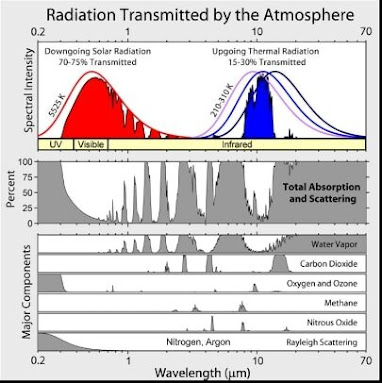 A 40 minute YT-video from David Siegel shows the same graphs (and more..)
https://www.youtube.com/watch?v=76Ln3Ou6jnc&t=1244s
More:
http://www.climatecurious.com/
Interesting as well:
https://www.klimaatfeiten.nl/
Posted by PA2RF at 05:25 No comments:

It is produced in 1947 by the company Royal, which had its headquarters in New York City and its factory in Hartford, Connecticut (USA). I found that millions of this typewriter had been produced and have been spread all over the world.

The one I bought shows severe marks of use, but a first trial indicates that most functions are still in tact. 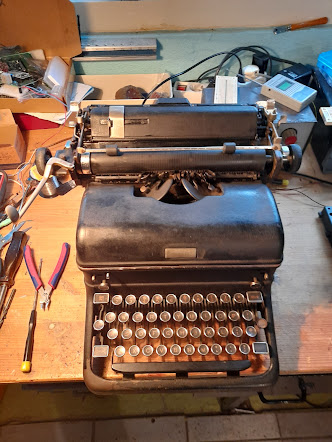 I know this device does not need a battery and has nothing to do with radio. Sometimes I just like old mechanical stuff. But hee, doesn't the QWERTY keyboard look familiair to our PC keyboards ? (Yes, it does !).

On YT,  I found a nice movie from Joe Van Cleave who explains the typewriter functions in a clear way:

Anyway, I will be busy coming weeks trying to restore this incredible machine as much as possible in its original state (where can I buy the ink ribbon ??) 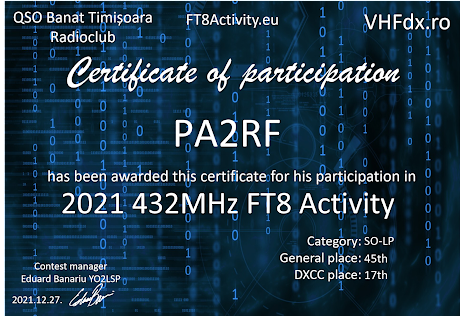 This is a screenshot of Meteor Scatter (MS) signals received yesterday: 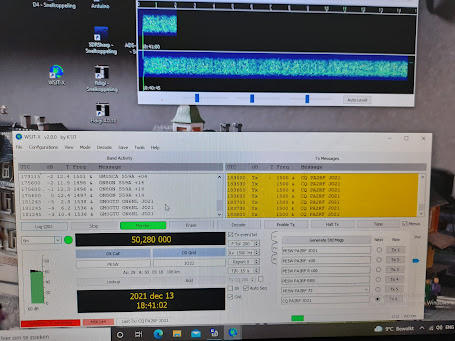 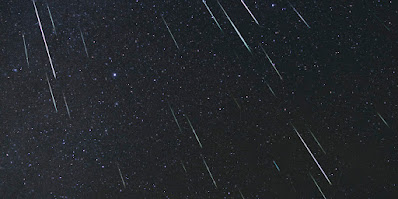 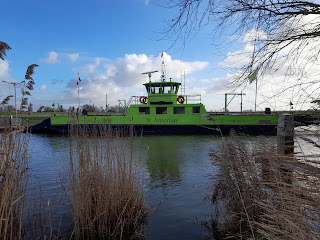 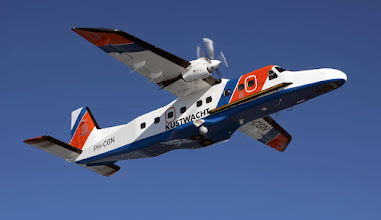 Since the ‘old fashioned’ modulation AM is used, a simple detector (e.g. Schottky diode) can demodulate the airband waves. The schematic below shows a simple receiver that enables you to receive (strong, nearby) AM transmissions. Not a lot selectivity, so you may receive more transmissions on various frequencies at the same time..

More info about this design:

I was intrigued by a similar design - using PNP transistors - a long time ago. It was a design from the book “Jongensradio” from 1967. I never built it.

No, Doggerland is not a new DX entity.

Doggerland was the land between England and Holland/Belgium/Denmark appr. 10,000 years ago. The Northsea has taken its place nowadays. 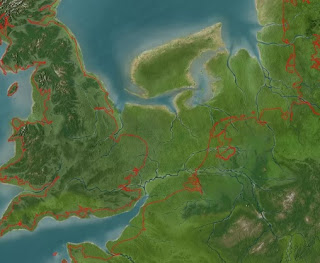 Doggerland, abt. 10,000 years ago
Past years the Northsea has shown to be a gigantic storage of fossils. Fossils from The Netherlands, with Doggerland as origin, can be found on the Dutch beaches, in particular Maasvlakte2 and the Zandmotor (near Kijkduin). The sand used for those beaches comes from the Northsea floor and contains fossils.
I have visited Maasvlakte2 a couple of times and have found some small bones of mammals from the Pleistocene.
Interesting to know is that the Northsea level rise was 5 - 10 cm a year those days. Past 100 years the Northsea level rise is appr. 1.5 mm (millimeter) a year.
I got in contact with Kommer Tanis, a fisherman who lives in Havenhoofd, close to where I live on Goeree-Overflakkee. Kommer is a fossilhunter and has been collecting fossils for the past 40 years. Between the fishes he catches, sometimes there are fossils. Kommer has a nice fossile collection at home. In his workshop he prepares the fossils. 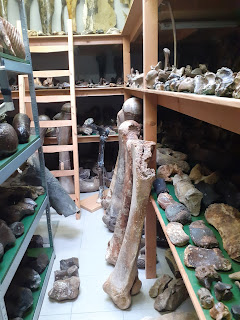 The big bones are mammooth bones 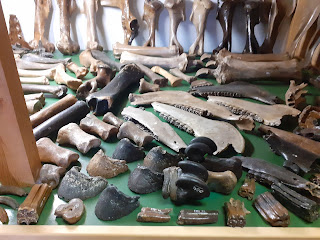 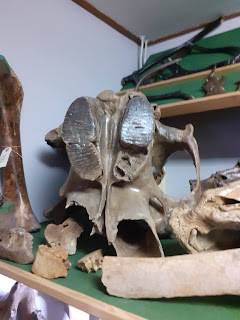 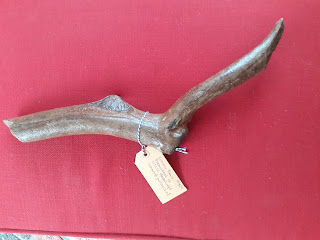 Kommer has a small shop where he sells some of his fossils. The above picture shows part of a deer antler which I took home (Estimated 12,000 years old).
If you want to get in contact with Kommer Tanis, you can e-mail him: tanisfossils(at)go6tanis.nl